A recent article on Pink Bike has gotten a lot of attention lately.

The piece was essentially a press release by Pole Bicycles about why they wont be making a carbon fibre bike anytime soon. They had various reasons, but one of them struck a cord with me as it was the same reason why when choosing my new trail bike, I went with alloy and not fibre.

carbon fibre is not

I would be naive to think, that in some point in the future, that my current wunderbike will not be essentially worn out beyond use. It may suffer from metal fatigue and be no longer safe to ride, it may simple outlive me and have no use once my need to ride has past.

Sobering thoughts, but lets not be blinkered about this. All consumer goods (bikes included) have a life span and when that time is up we need to consider how we safely dispose of and reuse the materials they are made of.

Whilst carbon fibre to a certain degree can be recycled, due to the very nature of the material once recylced it is weaker and not fit for load bearing applications. The current recycling processes also require the material to be either burnt or melted in chemical baths to release the carbon fibres themselves from the polymer resin then are incased in. Both fairly damaging processes, either through the chemical waste created or the toxins released into the atmosphere.

In short, carbon fibre cannot be, safely recycled into a meaningful raw material for remanufacture. Whilst metal is infinitely recyclable, carbon fibre is not. This is not a new problem and cycling is not the largest producer of carbon or resin waste. But that does not mean we should, or rather, that I wanted to perpetuate it.

I do not judge other people for choice in carbon components, now in full disclosure, I have carbon bars on two bikes, both are second hand bars. I feel that if I were not using them they would most likely be sitting in a shed getting damp. I also grant that carbon has some benefits both in performance and aesthetics, but new carbon fibre is not for me. 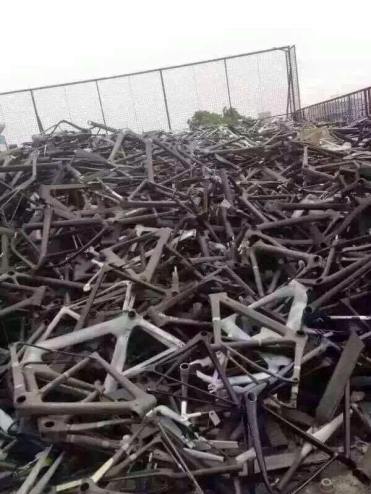 The thing that first made me ask the question myself was a picture from behind a factory for high end carbon fibre road bikes. The pictured showed a pile of quality control fails dumped behind the factory that would dwarf a bus. This pile will not bio-degrade, they cannot be melted down and they will still be here in centuries to come. I considered that this was one product line of one factory. That it would likely be a similar story at many carbon bike frame and component factories. Each having a similar pile of factory fails, all waiting to be crushed by bulldozers at a landfill site.

With the large scale use of carbon fibre in the likes of aviation, renewables and the increasing growth of its use in the automotive industry, all meaning that there is a vast and growing amount of carbon that will need recycled. This creates an opportunity for a process of meaningful disposal or recycling to arise, as there is a business there and money to be made.

But I could not comfortably buy a carbon frame with that end disposal question being solved by some future what if?

We need to learn the lessons from history when it comes to materials like carbon fibre. They mostly seem to have been ignored or belittled by the mockery suffered by some of the more iconic uses of similar materials. For example, there is Duraplast and the little East German car, the Trabant.

The Trabant 601  was a car manufactured in the DDR from 1963-1990, it featured a metal monocoque body with body panels made of a material called Duraplast. Duraplast is not dissimilar to carbon fibre or fibreglass, it used cotton or wool as the fibres and held them in a resin based plastic similar to bakelite.

Now the problem with Trabi’s beyond their soviet obsolesce, is that once the car has died, once the chassis has rotted beyond saving, the panels will live on. East German scrap yards and country lanes have at one time or another been filled with dead and abandoned Trabant’s whos body panels will not rot and cannot be recycled.

They will outlive history and carbon fibre has the potential to do the same.